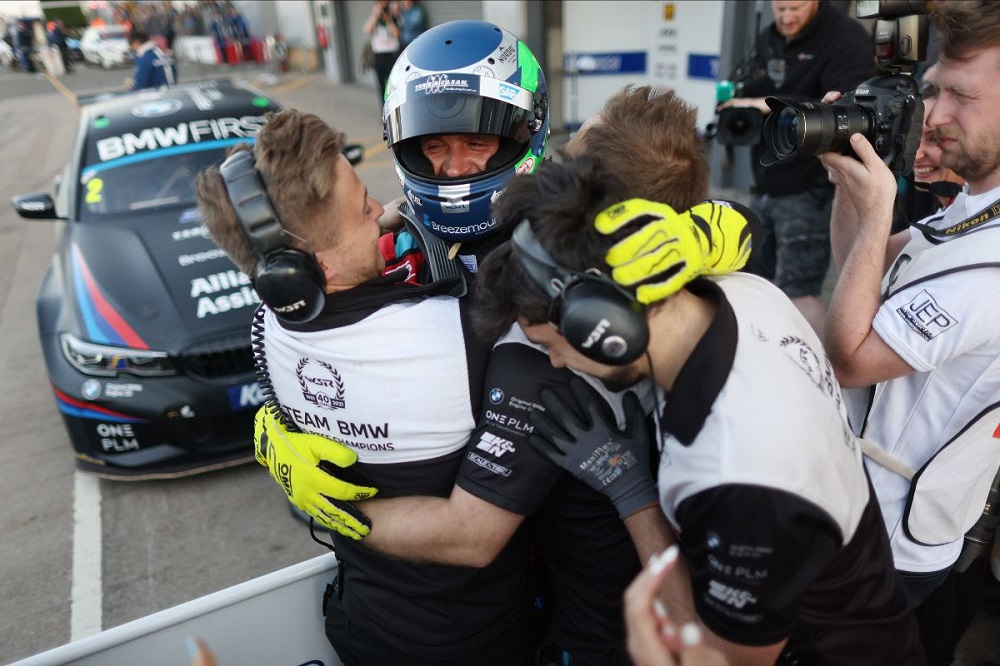 Team BMW’s Colin Turkington bounced back from near-disaster at Donington Park to claim a dominant British Touring Car Championship victory in the last race of the day to set up a dramatic five-way fight for the Drivers’ title at the season finale.

The Race-Three win was the 60th of the Northern Irishman’s BTCC career, putting him level with Andy Rouse in third place on the series all-time winners’ list and edging him even closer to the lead of the championship in his WSR-run BMW 330i M Sport.

It also ensured that BMW will go to the final event of the season with a commanding lead in the Manufacturers’ Standings as they seek a record-breaking sixth-consecutive title.

After a well-judged run to fifth place earlier in the day while carrying 48kg success ballast, four-time champion Colin was attempting to move into a podium spot in Race Two when he clipped a kerb at Donington’s Old Hairpin and spun, dropping to 11th place.

But a stroke of good fortune came shortly after the chequered flag as he was randomly drawn on pole position on Race Three’s partially-reversed grid by model and racing enthusiast Jodie Kidd.

An inch-perfect drive in a ballast-free BMW delivered him victory with the fastest lap; a result that moved him into second place in the Drivers’ Championship - 32 points behind the series leader with 67 on offer at Brands Hatch in two weeks’ time.

Significantly, Colin has won at Donington Park in every season since the BMW 330i, designed, built and run by WSR, debuted in 2019.

Team-mate Stephen Jelley made significant gains as the day progressed. Starting 16th in Race One, the local hero was up to 11th and aiming to improve further when a side-by-side moment at the chicane put him off the track and lost him several spots.

He finished 15th and then improved to 13th in Race Two. But the Leicester driver looked extremely racy in the finale, making further gains to finish ninth and move up a spot to 11th in the points.

Tom Oliphant endured a frustrating day, finishing 16th in the opener and then losing several spots in Race Two after being hit close to the end and dropping to 24th. The Leamington Spa racer finished 20th in the finale.

The WSR-run operation remain in the hunt for all three BTCC titles with BMW 91 points clear in the race for the Manufacturers’ crown and 111 available at the final three races.

Colin Turkington said: “That was a pretty emotional win. After what happened in Race Two and what it could have meant for the championship, getting drawn on pole was a stroke of luck. It’s still a big job to win - even when you are on pole - but the BMW was perfect and I think we got what we all deserved. I’ve possibly even scored more points this way than I would have done without what happened in Race Two. To get my 60th win and equal Andy Rouse’s total - which was the all-time record for such a long-time - is a nice feeling, but right now making sure we go to Brands Hatch with a decent chance of the championship is the most important thing.”

Stephen Jelley said: “We made progress with the BMW throughout the day and by Race Three we were in really good shape and fighting with some of the guys right at the top of the championship. I need to be able to nail the perfect lap in qualifying and put myself higher up the order for Race 1. The front-wheel-drive cars seem to have the ability to turn it on that little bit better for qualifying whereas our race pace has been stronger, it’s just been tough to come through the field when you’re in among a lot of cars that are pretty evenly matched. We’ll move onto Brands Hatch now and aim to end the year on a high.”

Tom Oliphant said: “It’s not been a good weekend performance-wise and it’s not easy to know why. We’re going to go into a lot of detail to find out why and understand what we need to do to put that right for Brands Hatch.”

Dick Bennetts, Team Principal, said: “I’m very pleased for Colin to end the weekend with not just an important win for the championship, but a milestone victory for himself too. That’s three years in a row that we’ve won here - at a track where handling is so important - with the BMW 330i M Sport. That proves what a well-balanced car we have. Stephen got better as the day went on and was really quick in Race Three, but I’m sorry for Tom because he shouldn’t be where he was this weekend. We’re going to look deep into everything to do with his car back at base to see if we can locate the cause. Brands Hatch isn’t far away and we need to be as ready as we can be to fight for the championship.”