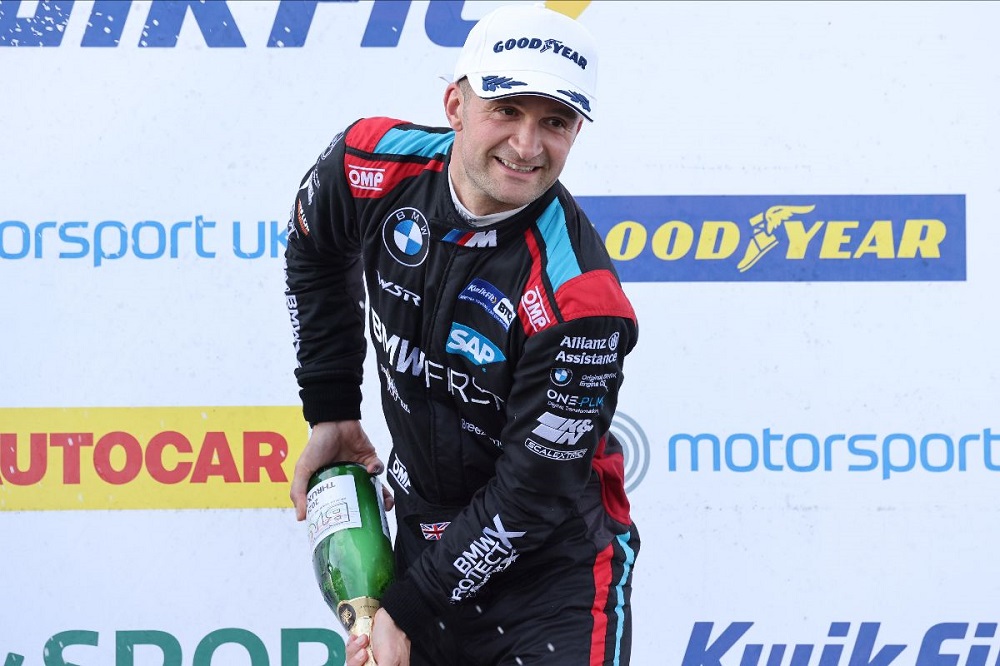 A magnificent triple podium result for Team BMW at Thruxton maintained their push for the British Touring Car Championship at on Sunday.

Two third-place finishes for Tom Oliphant followed by second in the finale for Colin Turkington increased BMW’s lead at the head of the Manufacturers’ title race as well as moving Team BMW up to third place in the race for the Teams’ crown.

Having secured his best-ever Thruxton qualifying result with fifth on Saturday, Tom drove magnificently on raceday. Maximising the potential of his WSR-run BMW 330i M Sport, he gained several spots on the opening lap and finished third.

He repeated the result in Race Two; several key set-up tweaks helping the Leamington Spa-based racer deal with the 57kg success ballast his 3 Series was forced to carry, and added 12th in Race Three, having been surrounded by many lighter cars from his sixth spot on the grid.

Colin’s push to add to his four BTCC titles began with 12th place in Race One as he carried 57kg success ballast but, having lost the weight, he progressed to sixth in Race Two and was randomly drawn to start third on Race Three’s partially-reversed grid.

A determined drive to second place gave the Northern Irishman a fifth podium finish of 2021 and meant that WSR-run cars have now finished on the rostrum in seven consecutive races.

Colin is now fifth in the Drivers’ Championship, but only four points away from third spot, and now crucially needing to carry less success ballast when the series heads to Croft in three weeks’ time.

Stephen Jelley endured a tough raceday after qualifying 15th for the opener; the Leicester racer unable to free himself from the middle of the pack while carrying 21kg success ballast and finishing exactly where he started.

He improved to 14th in Race Two - having run as high as 11th following a strong start - and rounded out the day with 15th, which ensured he collected a triple helping of points.

He’s now 11th in the standings, three places above Tom.

Tom Oliphant said: “I’m very pleased with a double podium here. My target for 2021 was to drive better than ever before and I feel I’m doing that. That’s as many podiums as I’ve ever had in a BTCC season. The two weekends this year when I haven’t been taken out by someone else, I’ve had a double podium so I think I can be happy with where things are heading speed-wise. We had some good insight from Colin after he had 57kg in Race One, so we were able to use some of that with our Race Two set-up and actually the car felt even better than it had done without the weight. I’m really excited about what we can do at Croft - a real BMW circuit.”

Colin Turkington said: “I’m pleased with the points scored this weekend, especially when you consider I qualified ninth. The weekend’s kind of gone in reverse. Normally I’d be happy with second, sixth and 12th in that order, so to still get those points, but wait until Race Three to get the podium works just as well for me. Importantly we made the BMW quicker and quicker throughout the day. I’ve lost a couple of places in the championship, but the points are really close, so I’d rather be fifth and taking 39kg ballast to Croft than third and taking 57kg. That’s a track where we can really attack.”

Stephen Jelley said: “It’s been a frustrating weekend. We’ve been on the back foot since the accident in FP1 and just never been able to break free of the midfield, especially at a track like this that favours front-wheel-drive cars. We’ve scored points in all three races though and that’s better than we managed when we raced here in April. I’ll be much happier to get back to a more conventional circuit like Croft where we can really get the hammer down and move back up the championship standings.”

Dick Bennetts, Team Principal, said: “We've scored three podiums from three races, a 100 per cent reliability record at a track that puts the cars under a lot of strain, and some good points at a track that has never traditionally been one that favours rear-wheel-drive cars. Tom’s had two very strong podium results, driven well with a lot of weight in the car and the results he and Colin scored have been very important in moving us up into the top three in the Teams’ Championship. We’ve also pulled further ahead in the Manufacturers’ points at BMW UK’s home circuit, which is very pleasing. We can go to Croft in a few weeks confident that we can keep up the push for the title.”