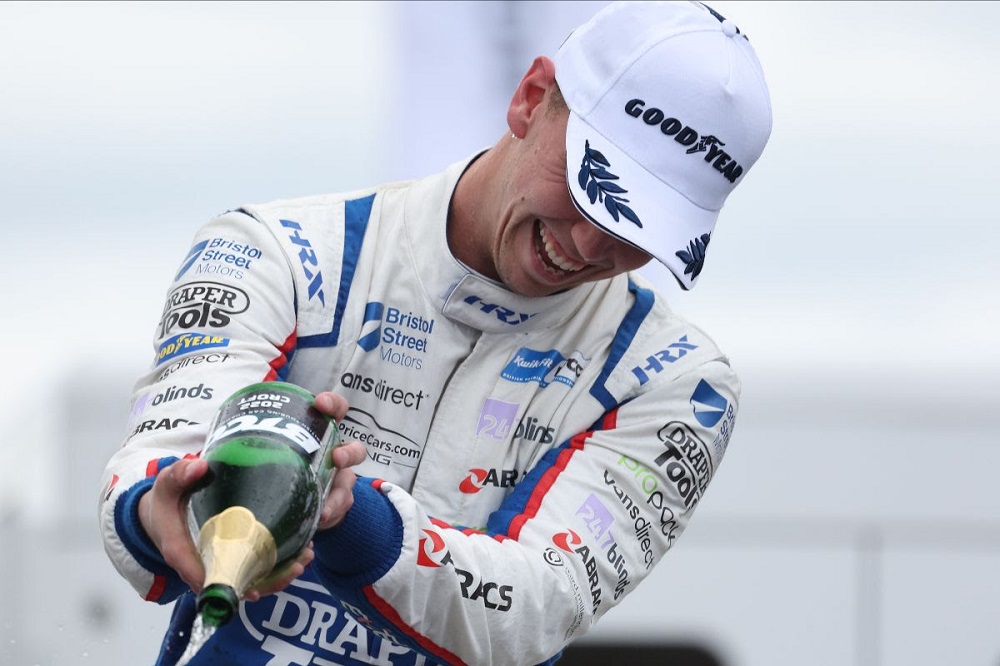 The Bristol Street Motors with EXCELR8 TradePriceCars.com man was taken to hospital for precautionary checks just two weeks ago following his accident at Oulton Park last time out, but after being given the all-clear to race, as well as his team rebuilding his severely damaged Hyundai, the 30-year-old was in flying form at his local track.

Halfords Racing with Cataclean’s Gordon Shedden then bounced back impressively from a challenging day to win the final race before the mid-season break, as the Scotsman claimed a lights-to-flag success.

Lloyd took a hugely popular and emotional victory in the opener as the home hero produced a fantastic drive.

From third on the grid, Lloyd’s #123 machine launched past Halfords Racing with Cataclean man Dan Rowbottom into Clervaux for the first time.

He nipped by pole-sitter Colin Turkington before the end of the first lap and then fended off the Team BMW star for the remainder of the race to take a second career BTCC triumph.

The feel-good story was completed with Turkington following Lloyd home, as the same two drivers were affected following the aforementioned accident at Oulton Park a fortnight ago.

Lloyd's car was in serious need of repair, whilst West Surrey Racing had to rebuild Turkington’s 2019 title-winning BMW to get him onto the grid this weekend.

Incredibly, both Lloyd and Turkington proved to be the cream of the crop in the first race, as the former took his first BTCC win in four years.

It was a Bristol Street Motors with EXCELR8 TradePriceCars.com one-two in the second contest, as Lloyd led home team-mate Tom Ingram.

Whilst Lloyd got off the line well to hold the lead for the full 18-lap encounter, Ingram was on the attack from the off, dispatching the Honda of Rowbottom around the outside at Clervaux before setting his sights on Team BMW’s Turkington.

With the #80 Hyundai making quick work of moving into second, Turkington held P3 for the remainder of the bout to secure a second podium finish of the day.

Scotsman Shedden set the pace in the final free practice session yesterday, which he followed up with a top-five lap time during qualifying, but it all unravelled with broken suspension in the opening race in North Yorkshire.

A fightback drive to 12th in the second bout was followed by a dominant lights-to-flag triumph in the finale, as the curtain came down on the first half of the 2022 BTCC season.

Rich Energy BTC Racing’s Josh Cook closed the gap in the championship fight with second place, as he too ended a difficult weekend on a high.

Toyota GAZOO Racing UK’s Rory Butcher showed solid pace throughout the event, and he was rewarded with the final place on the rostrum – two Scotsmen on the podium before the trip to Knockhill next month surely increasing anticipation even further, for what is always a passionate crowd in Fife.

Ingram’s consistent finishes promoted him to the top of the Drivers’ Standings, with Cook now three points in arrears. Turkington has improved from fourth to third overall after his own impressive points haul.

Cook and his Rich Energy BTC Racing squad maintained their advantage in the Independents’ Standings, whilst another Jack Sears Trophy win for Bobby Thompson increased his margin at the front of that particular category.

Turkington remains the best overall qualifier during the season so far and therefore holds sway in the Goodyear Wingfoot Award.

Dan Lloyd said: “I’m an emotional wreck, I really am. The last two weeks have been hell and yesterday was good enough to come back and put it third on the grid. I’ve only had one win in the BTCC and that was here four years ago, you couldn’t write it! We made a big improvement to the car from race one and it obviously paid off. It was much easier to handle out the back. I preferred having my team-mate behind me than Colin [Turkington], too. It’s pulled everyone together after rebuilding the car and I’m closer to them more than ever, it’s like a big family.

“I just want to say a thank you to everyone for all the support. The last two weeks, not just physically, I’ve been through a lot, but the support kept me going. I came into this weekend thinking I’m going to give it my all. I went over the line, and I think it took half a second to burst out crying, I punched the air so hard I actually hurt my back.”

Gordon Shedden said: “There were some mega moves, the car has felt really good all weekend. That’s why I was so disappointed after race one because it felt like we were just giving it all away. Some points in race two and to finish on top of the box, then obviously next time out being Knockhill, you couldn’t script it any better.

“If you think the action here was good, I think the action at Knockhill will be absolutely incredible at the end of July. This has been a really good end to the weekend, and we get a little bit of a summer break now. We have work to do but are in a good place right now and the car feels good so hopefully we can come out fighting in the second half.”

Tom Ingram said: “I’m really pleased with that. The start was critical because I knew that’s where it’s so important – especially around Croft – so you’ve got to make hay while the sun shines. It’s fantastic to get a one-two for the team, absolutely amazing. I’m really, really chuffed, it puts us right where we need to be.

“I’m really pleased, to have your team-mate battling with you, it’s always good fun because we’ve got respect for each other. He’s a quick peddler, a quick guy, it’s great to have him as part of the team and it’s really working well for us all. It really has been such a team effort; we’ve really worked really hard and it’s a real sole unit to come up with the package that’s working so well.”

Race 2:
Ash Hand was penalised by the addition of 4 seconds to his overall race time after obtaining an unfair advantage by gaining position completing an overtaking move beyond the limits of the track