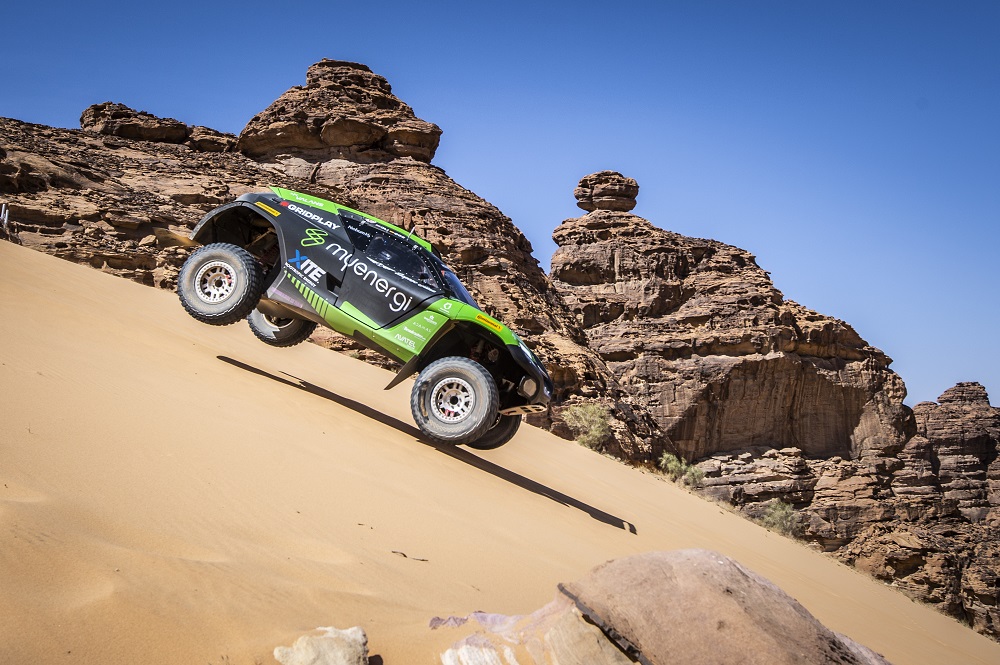 After a stunning Extreme E debut in the Arabian desert last month, Bristol racing driver Oli Bennett moves to Africa and the shores of Dakar’s Lac Rose for round two next week.

Like Saudi Arabia’s season opener, sand is the surface for round two, Senegal’s Ocean X Prix (May 29/30).

“The problem with driving one of the world’s fastest electric SUVs is that you just don’t want to get out of the car,” said Oli. “As soon as you hit the throttle you get 400kw of power delivered in the blink of an eye. There’s so much torque, so much power and so much lift, it’s an absolute blast to drive this car and to drive it in these extraordinary locations.

“The first round in Saudi was great for us. We’re up against some of motorsport’s biggest names, but in terms of local competition, Somerset’s Jenson Button is the one to watch for me. Beating Jenson – the 2009 Formula 1 World Champion – was a great result for me and my fellow HSX Racing powered by myenergi driver Christine Giampaoli Zonca.

“It’s a little bit frustrating not to have driven the car between the two races, but that’s the nature of this championship. As well as the competition, we’re here to raise awareness of some of the planet’s most climatically challenged locations. To do that in the most sustainable way possible, the series organisers are sending the cars from place to place by boat.

“Along with the cars from the other eight teams, our HSX Racing powered by myenergi ODYSSEY 21 was loaded onto the boat in Saudi Arabia a couple of days after round one and it docked into Africa earlier this month. As well as being the most environmentally friendly way of getting around the globe, it’s also the coolest.”

Oli’s presence in the groundbreaking, all-electric off-road series is just part of his holistic commitment to sustainability. As well as competing in the world’s most exciting and forward-thinking championship, the 28-year-old’s Bee Green Energy firm delivers 100MW of wind farm and solar-sourced power to the national grid.

“Racing is a huge part of my life,” said Oli, “but so is sustainability. We only get one shot with planet earth, we have to look after it. As well as some exceptional off-road driving, we’re in Senegal to highlight some of the massive challenges facing both this area and the planet as a whole.

“Did you know 12 million tonnes of plastic is dumped into the world’s oceans every year? That means there’s around 5.25 trillion pieces of plastic pollution in the sea, contributing to the death of more than a million seabirds and 100,000 marine mammals.

“As a company, XITE Energy is sponsoring the championship as well as our own team and part of this commitment is the supply of reusable bottles, helping to reduce the use of plastics in the series.

“But as well as looking after the planet, we have to look after each other, which is why XITE Energy makes a donation to a mental health charity for every can we sell.”

Extreme E is also promoting gender equality, with each car crewed by a female and male driver. Oli will share the HSX Racing powered by myenergi Team with Christine Giampaoli Zonca. The pair will swap seats in an all-action pit stop after the first of two laps of the African beach-based, circuit.

The HSX Racing powered by myenergi ODYSSEY 21 is one of nine purpose-built e-SUVs competing in season one of Extreme E. All nine identical cars are built by Spark Racing Technology and incorporate a niobium-reinforced steel alloy tubular frame as well as a bespoke safety cell and roll cage. The battery is produced by Williams Advanced Engineering, while Continental provides the tyres.