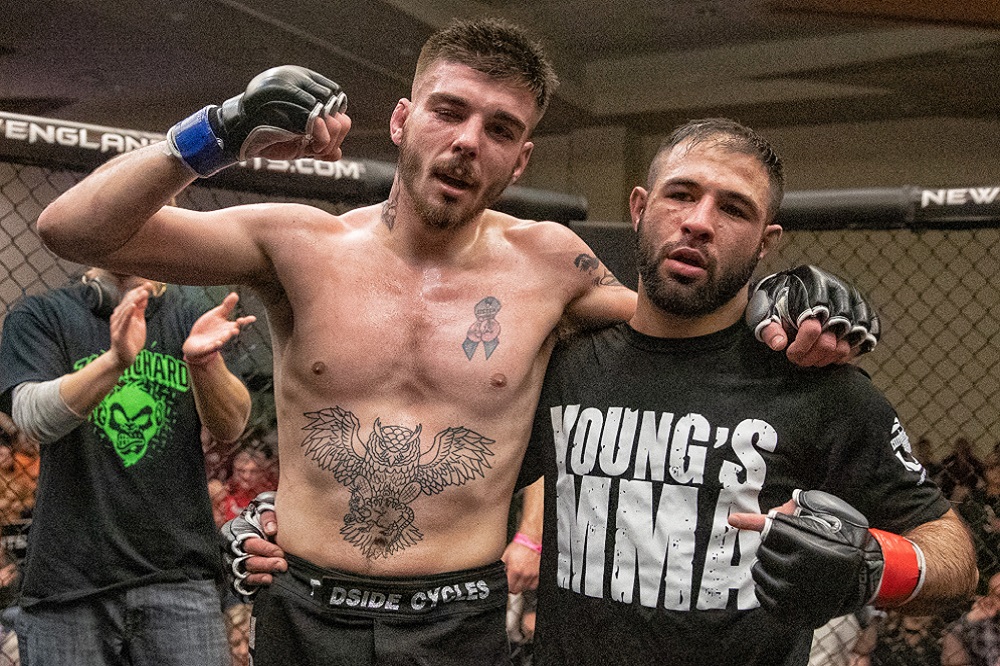 Three prior forays into the New England Fights cage demanded all of five minutes and nine seconds from Zac Richard.

That was the aggregate time it took for the native of Waterboro, Maine, to accumulate three wins by knockout or submission and earn a shot at the vacant NEF amateur featherweight title at NEF 37 on Friday, February 1.

Richard probably only now fully appreciates how the odds were stacked against him that frosty evening. He was paired with Fred Lear, a veteran of eight previous fights who won the bantamweight belt in his previous outing. Both Lear's home and training center sit a stone's throw away from the Cross Insurance Center, scene of the showdown.

While draws are a rare turn of events in mixed martial arts, and ties are universally maligned as an unsatisfying outcome to any sporting endeavor, Richard can appreciate the judges' indecision after the first true donnybrook of his budding career.

Richard, a Maine state wrestling champion in high school, has worked on the finer points of his stand-up game with UFC veteran Devin Powell and other instructors at Nostos MMA in Somersworth, New Hampshire.

“It started out good. I felt in control from the beginning. I wanted to stay on my feet and really show off how much my striking has come,” Richard said. “And I knew Fred was a really game opponent on the ground and has been training a lot longer than I have. So I wanted to keep it on my feet. But staying a wrestler is such habit. The first combination I threw, I went down for a shot.”

Lear's assault to the body admittedly took a physical toll on Richard. The newcomer obviously never experienced such blunt trauma in his pre-MMA combat days and hadn't been touched in his career-opening win streak against Gabriel Diaz, Clifford Redman and Chris Lachcik.

“I got really gassed and winded, because he kept landing knees and punches to the body,” Richard said, “I kept waiting for my second wind to come and it never did. I tried to get in a combination or a good slam every once in a while.”

Even sitting on the stool in his corner between rounds was surreal.

Of course there were thoughts of Richard's sister, Lacy, who lost her battle with cancer in 2012 but continues to inspire Zac with her fighting spirit. Having time to get in touch with one's thoughts and survey the scenery aren't the norm when you're finishing opponents before the echo of the opening bell fades.

“Most of my fights have been pretty quick. It was definitely a weird experience,” Richard said. “I've never had that between rounds. I was looking out in the crowd and would see one certain friend or family member or training partner every time. It was a lot bigger deal than what I'm used to.”

When it became obvious Lear wasn't ripe to be knocked out, Richard tried to balance self-defense while keeping the scorecards in mind.

“Going into the fourth and fifth round, I knew I was tired, and I knew Fred could punch and kick just as well,” he said. “I was thinking to myself, 'You've got to keep your hands up. This is dangerous when you're tired.' All I kept thinking about was don't get hit. Hit him.

“Every time the clackers went off, when there was 10 seconds left, I tried to get up from the bottom or get in a kick or land one last good strike. That was different, because I never had that—I've never even heard the 10-second clackers. I definitely could hear it more than the buzzer, because the last few seconds it would get so chaotic and everyone would get so loud. The ref would just grab us I'm like, 'Is it over?' I never experienced anything like that in wrestling.”

Those back-and-forth battles in regional and state mat affairs did serve Richard well. He felt that he was mentally prepared for the championship rounds, even as the physical toll increased.

Richard acknowledged that he has a bad habit of training without using his mouth guard and that it may have affected his breathing in the bout.

“I've been in some pretty long wrestling matches, as many different types as you can get in,” Richard said. “I was always a really good wrestler in overtime. I don't think I ever lost in overtime. If I did, it was like once. But the thing with wrestling is you're not getting punched and kneed in the stomach and other things that are taking your wind. I was just so tired. I knew the whole time I wasn't proud of my performance, but you've got to do what you've got to do. I kept telling myself I had to get up and do something.”

While unhappy with the draw, Richard takes encouragement from many details that have come to light in the aftermath of the fight.

The mixed result surely entitled Richard to an immediate rematch. That won't explicitly happen, as Lear informed him that he intends to turn professional.

“I remember February 14 of last year was the first NEF fight I ever went to. I had only been training for a month and (NEF co-owner and matchmaker) Matt Peterson asked me to go,” Richard said. “So I went, and here it is a year later I'm fighting for a belt against a kid that fought for the belt a year and a half ago. Finding out after the fight that he's going pro, it really made me a lot prouder of how I did. If he can pro after that fight, and I've only been fighting for a year, then I've got pretty good hope for my future.”

That future will include another crack at the belt, on April 27th.

“I'm the Number 1 contender, and he's going pro, so it's whoever's next,” Richard said. “I don't know if they're going to bring in someone from somewhere else or what. Matt said he's working on opponent. I'll be ready.”