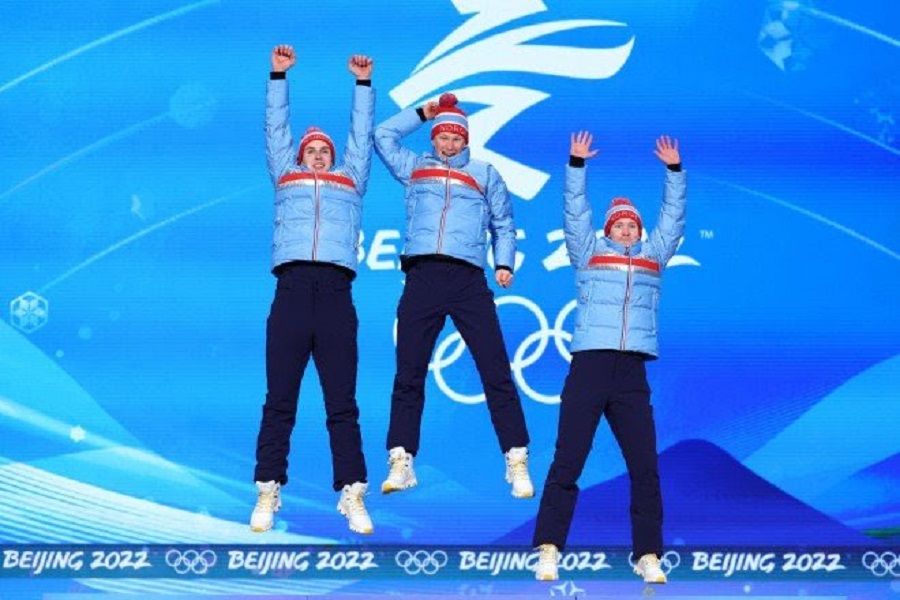 The athletes representing the Russian Olympic Committee (ROC) surprised Team USA in the semi-finals. Having qualified third from the quarters with a time of 3 minutes and 38.67 seconds, Ruslan Zakharov, Daniil Aldoshkin and Sergey Trofimov gave it all against their American rivals, skating a new Olympic record time of 3:36.62s. Casey Dawson (USA), Ethan Cepuran (USA) and Emery Lehman (USA) also beat the previous Olympic record by 0.03, finishing in 3:37.05s. Not having made it into the Final, was a bit of a disappointment for the USA, but they made up for it claiming bronze, beating the Netherlands. Joey Mantia (USA) replaced Cepuran in the Final. Mantia did not think he could have made any difference if he had skated in the semi-finals: “The way these guys skated in the Semis… Olympic record. How unlucky do you have to be that Russia does four seconds faster in the Semis, than they (eventually) do in the Final? (They had the) race of their lives. You can’t really be sad about that. We all did the best we could today.”

Norway did not need to give it their best in their semi-final race, keeping the Netherlands at bay relatively easy. In their fixed train with Peder Kongshaug as pilot, Hallgeir Engebråten as middle engine and Sverre Lunde Pedersen pushing from the back, the well-oiled machine kept the faltering Dutch squad 1.34s behind. After Sven Kramer (NED) started faster than Norway, Marcel Bosker (NED) took over the lead, but he couldn’t keep up with the pace of the Norwegians, who stayed in formation throughout the race. Patrick Roest (NED) led the Netherlands in the final part of the race, but couldn’t make up the lost ground.

Winning most Speed Skating medals in the individual distances, the Netherlands just don’t seem to be able to convert their individual abilities into a well-functioning team. After also having lost the battle for bronze against Team USA, Kramer was self-critical: “I’m part of the problem myself, I have to take responsibility too. (In the Netherlands) the individual distances always get priority. Maybe the time has come to change that.“ The record Olympian Speed Skater will not be part of that change himself, because he will quit the sport after this season.

Norway knew they had a fight at their hands in the Final after Russia broke the Olympic record in the Semis, but it seemed as if the athletes representing the Russian Olympic Committee (ROC) had emptied most of their tank in that early afternoon effort. Both Norway and Russia entered the gold-medal-race in the same line-up as they had fielded in the Semis, and Norway took the initiative from the start. Being pushed from behind by Engebråten (NOR) and Pedersen (NOR), Kongshaug (NOR) steadily increased the gap over Team ROC, finishing in 3:38.08s. Zakharov (ROC), Aldoshkin (ROC) and Trofimov (ROC) clocked 3:40.46s.

For Pedersen (NOR) it was the second consecutive Team Pursuit gold, after having won the 2018 Olympic Winter Games title together with Håvard Bøkko, Sindre Hendriksen and Simen Spieler Nilsen. In Beijing this year, Pedersen together with Engebråten and Kongshaug, altered the team’s tactics going for a pushing strategy throughout the race, instead of changing up front. "I had a different role this year,” Pedersen said. “Last year we saw that the potential for these tactics is really high. For me, the role was the best one I could do now. Of course it's special to do it again. We showed that our team is the best in the world, it's amazing.” After being severely injured over the summer due to a bike crash, Pedersen was happy to just be back on the ice, let alone to come back with a gold medal: "It means everything,” he said. “I was pretty far down during the summer, but my family kept me going. After I got better in August, I started training again and the body was still good.”

For Team ROC’s Zakharov the silver medal was special too. "One week ago, if someone had asked me if we would be on the podium, I was not thinking about it. We were not super strong,” he said. At age 34, Zakharov became only the second male Skater ever to have won medals in both Short Track and Speed Skating - Eric Flaim (USA) won long track 1500m silver in 1988 and Short Track 5000m Relay silver in 1992. “Five years ago, I didn't even know how to (ride) a bike. In Short Track, we never did that,” Zakharov said. “The first year was crazy difficult, then it was 2018 we couldn't come to the Olympics (the Russian Olympic Committee was suspended because of a doping ban)." Having won silver, Zakharov now aims at more. "We are strong, we always fought for this (result). I promise you, in 2026 we will win this."

Building up for the Women’s climax

The Women’s competition built up to a superb climax, with defending Champions Japan and World Cup winners Canada easing into the Finals at the cost of the team representing the Russian Olympic Committee (ROC), and the Netherlands. After having broken their own 2018 Olympic record in the quarter finals with a time of 2:53.61s, Japan’s Ayano Sato, Miho and Nana Takagi, only needed 2:58.93s in the Semis to beat Yevgenia Lalenkova, Natalya Voronina and Elizaveta Golubeva (ROC), who clocked 3:05.92s. Canada had more of a battle at their hands versus the Netherlands in the Semis. Relying on their team routine, Ivanie Blondin (CAN), Valérie Maltais (CAN) and Isabelle Weidemann (CAN) skated 2:54.96s, to keep the individually much decorated Ireen Wüst (NED), Irene Schouten (NED) and Antoinette de Jong (NED) at bay by 0.98s.

Schouten (NED), who won the 3000m and 5000m gold at the Beijing 2022 Olympic Games already, kept her comments short and simple: “This was the best result possible for the moment. The others are better.” Just like their male compatriots, the Dutch Women were not able to set out as a real team and record Champion Wüst, who won 1500m gold in Beijing, explained: “I think the Norwegian Men are the best example, and the Americans too. It just looks as if there’s one Skater going round the track. The Japanese ladies and the Canadians, they train with each other every day. They don’t have (different) commercial teams (like in the Netherlands), which makes it a lot easier. I do think it has to change (in the Netherlands), but that’s up to them (pointing at her teammates, because she’ll quit skating herself). I think that training as a team also make the individuals better, so it doesn’t have to come at the cost of one or the other.”

In the Final, Miho Takagi (JPN) led out Japan to an early lead, but Canada hung in and once Weidemann (CAN) had set herself to the front for the final three laps, she slowly started reeling in Japan. Heading into the final 200m, the difference was down to 0.32s, and the Japanese ladies had to give it their everything to stay ahead. Everything eventually proved to be a little too much for Nana Takagi. Halfway through the final corner she stumbled and crashed out from last position, leaving the team in disarray. The defending Champions had to settle for silver. “My mind hasn’t recovered from the fall. It’s hard for me to think or talk about it right now,” a devastated Takagi said. Her sister Miho took her third silver medal in Beijing, after already coming in second position in the 500m and the 1500m. “It was such a close and tough one,” she said before thanking her fans: “We hope to have brought them insights on skating with our race but, still, competitive sports are all about winning. We feel really sorry for this regretful result, for failing our fans.”

While the Japanese Women comforted each other, the Canadians took up the Maple Leaf flag and celebrated. Blondin (CAN) was the only one who actually had seen Takagi (JPN) fall over, but she thought Canada would have won anyway: “I was behind Izzy (Weidemann), I think she just puts her head down and pushes. I am a little more aware and I was actually keeping up with the screen and I saw that we were getting closer and closer. I knew at that point that we were going to get them. Unfortunately they fell."

Valerie Maltais (CAN) followed Ruslan Zakharov’s (ROC) example winning a long track medal, after already having won an Olympic Short Track medal – Relay silver at the Sochi 2014 Olympic Winter Games). "When I think personally of my journey into long track Speed Skating, obviously it brings a lot of emotion,” she said. “I came to long track thinking I could be a good Team Pursuit Skater. I am really proud of what we have accomplished as a team. We believe in ourselves, I believe in the girls, the girls believe in me. We help each other, they teach me in a way how to skate. Up to this day, I am still looking to the girls like they're professional, and I'm just the girl learning from them every day.”