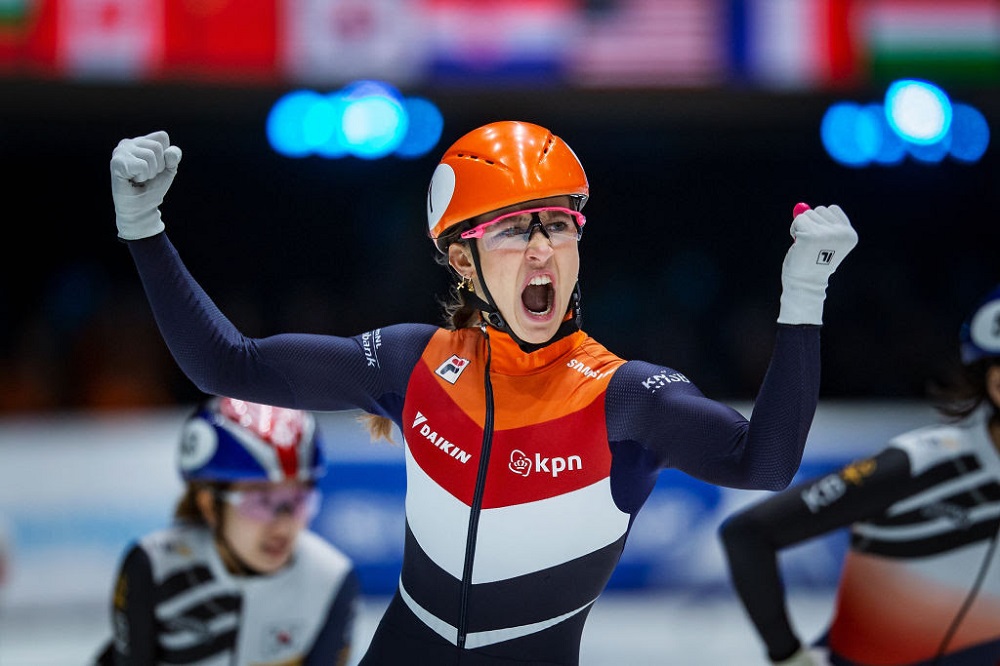 “I feel like I really grew towards this result,” he said afterwards. “I got better each competition and today I felt really good. To finally make it to the first place, is something big. It’s good for my motivation towards the Worlds (World Championships in Seoul in March), too.

“During the race, I tried to be calm and I managed to slowly move up to the first place. It was not easy to stick to my plan, though.”

His executed the plan well, however, finishing ahead of Cedrik Blais (CAN) and Itzhak de Laat (NED), who settled for silver and bronze respectively after a disqualification for Park Ik Wook (KOR).

“I just knew something would happen today,” Blais said of his first World Cup silver. “During the race I was always in the back, waiting for the opportunity to go in front. That opportunity came and I got into second place.

"At some point, there were two falls and a DQ. To be honest, it doesn’t really feel like as if I raced. Of course I am happy with the silver, but at the same time I think my race wasn’t that great. I’ll take it.”

“To have achieved this is one more step towards the big international level. I have won gold medals at the World Junior Championships [she was the overall champion in 2016/2017], but never won an individual gold in the seniors. I am very happy.”

Lee’s teammate Park Ji Won is used to winning medals and was the man to beat in the 1500m, after taking gold over the distance in Montreal (CAN) and Nagoya (JPN).

The 23-year-old skated fast throughout the race and managed to overtake his teammate Lee June Seo(KOR) on the line. Park clenched his fists, but was not sure of victory until the photo-finish verdict, which puts him to the top of the World Cup rankings.Ren Ziwei(CHN) finished third.

The 1500m finals also marked the individual comeback of Dutchman Sjinkie Knegt, who won the B-final after being sidelined for more than a year with two horrific injuries. “Competing in the final really felt like usual and I am very happy with the way I raced,” he said. “Today I showed that I’m on the right track.”

“It was nerve-racking,” she said after victory in the Ladies’ 1500m. “I knew it was going to be a fast race, so I really had to keep my calm. I really wanted to see what I could do in the last couple of laps.”

With Endor’s Pump It Up playing on the sound system and the crowd screaming for Schulting, the 22-year-old finished 0.2 seconds ahead of Kim Ji Yoo (KOR), with Noh Ahreum (KOR) in third place.

“It’s insane, to do this in front of a sold-out arena,” said the Dutch skater. “To take the win just on the finish line, that’s the most beautiful thing. It’s just sick.”

The fifth gold medal of the day was won by the Chinese squad, as they finished ahead of Rep. Korea and Japan in the 2000m Mixed Team Relay.