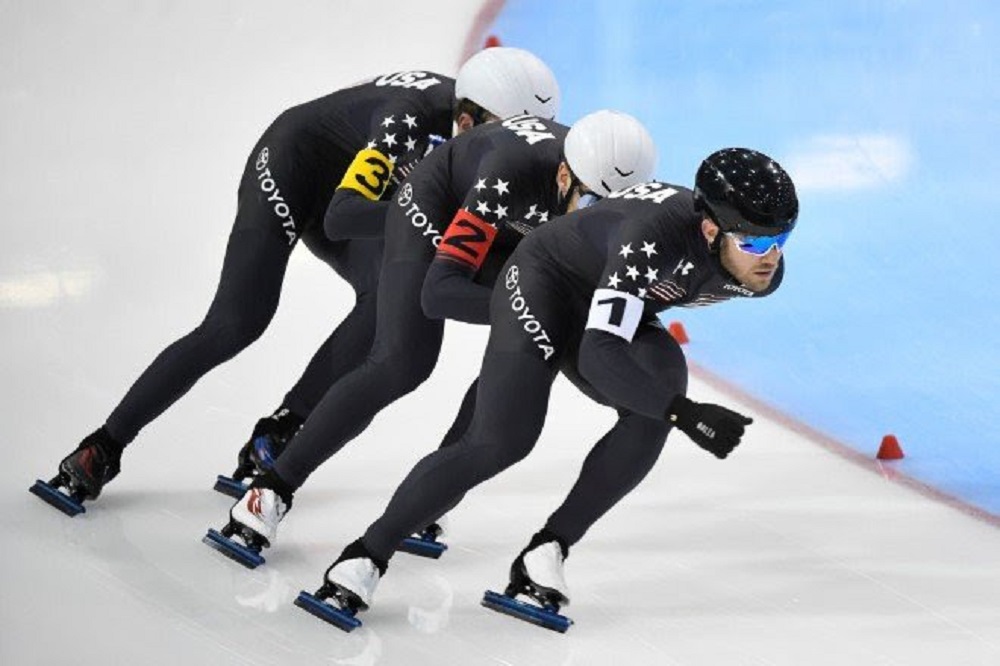 Joey Mantia (USA) saved the best for the last at his home World Cup in Salt Lake City. After having won the 1500m on Saturday already, the 34-year-old from Ocala, Florida, anchored teammates Emery Lehman and Casey Dawson to gold and a world record in the Team Pursuit to conclude A Division action on the final day of competition. Earlier on Sunday, Thomas Krol (NED) led the third Dutch podium sweep in the 1000m this season, and Wataru Morishige (JPN) seized his career first World Cup gold in the 500m.

In the ladies’ competition Miho Takagi (JPN) beat the rest of the field by almost a second and a half in the ladies 1500m. Ivanie Blondin (CAN) won the Mass Start, while Sofie Karoline Haugen (NOR) grabbed her career first World Cup medal, with a well-deserved bronze after an exhausting attack.

Team USA skated in the first pairing of the Team Pursuit competition, and executed their tactics to perfection.

Finishing in 3 minutes and 34.47 seconds, the Americans shaved 0.21s off a previous record the Netherlands had set at the 2020 World Championships in Salt Lake City.

Mantia led the way throughout the race with Lehman and Dawson pushing from behind.

“He's really the leader,” third man Casey Dawson (USA) explained. “We're the engines in the back pushing them. So that's how we think about it. We're just like a train going around the track.

Team USA has trained their tactics for some time, Mantia said, “We got together a couple years ago and decided that this would be the best way.

“These guys practice together and I don’t practice with them on a regular basis. They just do a great job practicing the pushing, and obviously it shows out there.

“I did the easy job. I just get up front and lead the way and these guys are pushing me so hard that I can basically just move my feet and I keep the rhythm and keep the speeds up,” Mantia said. “The magic behind our Team Pursuit being successful is that everybody thinks everybody else's job is the hardest.”

Lehman couldn’t agree more.“I'd just put it exactly like him (Mantia). I'm always in second position, and I always feel like, ‘I'm getting tired, well, how tiring would it be to lead the whole thing?’,” Lehman said. “So, like Joey said, I'm sure Casey (Dawson) feels the same, and when Ethan (Sunday’s substitute Ethan Cepuran) skates, that he feels the same.”

None of the teams that got on the ice after the Americans managed to come close to their time.

The Netherlands (Jan Blokhuijsen, Marwin Talsma and Marcel Bosker), who finished sixth in 3:39.79, retained the lead in the World Cup ranking, with Norway in second and the USA in third.

The European Sprint Champion was happy with the gold and the time he pulled off.

“It’s just 0.19s slower than my personal best, so well done,” Krol said. “I flew in late for this World Cup, so I did not have high expectations. I had a little trouble with the high speed, but it was a good race after all.”

Nuis said he always enjoys skating versus Thomas Krol, a matchup that has led to many great races over the past four years.

“It's really nice, but I gave this one away totally,” he said. “Yesterday, I started to slow, a bit to chill, too much on the outside of the blade. I wanted to be aggressive today, but I was a bit too much on the front of my skates and then Thomas came across really, really fast.

“My second lap was solid. Thomas had a wonderful second lap, but it was because he was behind me (getting a draft on the final back stretch).”


Krol insisted that he would have won regardless.

“I can skate very well without Kjeld too. Of course it’s nice to get a fine draft on the backstretch, but I had more speed coming out of that corner already. I was going to win anyway.”

Otterspeer took the bronze medal in 1:06.95. Like Nuis, he said he had been too aggressive.

“I know I'm in good shape, but you have to be pretty calm on this ice. I was too wild, too many misses.

“I'm actually surprised that I am on the podium, because the speed is there, but if you're making mistakes on this ice, you're losing pace real quick.

The fourth Dutch 1000m ace, Kai Verbij (NED) came in fifth on Sunday. In December, the quartet will make out which three skaters qualify for the Beijing 2022 Olympic Games at the Dutch trials.

“We four, we are the strongest this season,” Otterspeer said. “It will be a tough qualification with Christmas for us for Olympics, but we're doing great. I'm really happy with the level.”

Before the fireworks in the Team Pursuit and the 1500m, Wataru Morishige (JPN) celebrated his maiden World Cup win in an eventful 500m race.

Morishige clocked 33.99 seconds and was the second man to beat the 34 barrier this World Cup weekend, after Tingyu Gao (CHN) had set 33.96 in Friday’s B Division.

Promoted to the A Division, the Chinese sprinter got disqualified on Sunday due to two false starts, however.

Morishige surprised himself with a sub-34-second race.

“Of course I’ve been aiming for that, but for it to happen already… I’m very happy I managed to do it today.”

The 21-year-old sprinter thanked the staff of the Japanese national team for his quick development as a top skater.

“Since I joined the national team, everyone helped me, with funding and everything else around the sport, so I could focus only on skating.”

After Morishige set his time, Viktor Mushtakov (RUS) seemed on track for another sub-34-second race, but the Russian crashed and hindered pair mate Tatsuya Shinhama (JPN) coming down. The Japanese World Sprint Champion got a re-skate, but crashed himself during his second go.

The Canadian World Cup leader is looking forward to home ice in Calgary next week. “I'm excited to get more chances to skate a 33 too,” he said

Takagi (JPN) in league of her own in 1500m, Blondin (CAN) wins Mass Start
With a time of 1 minute and 49.99 seconds, the indomitable Miho Takagi (JPN) came just 0.16s shy of her own world record, in only the second sub 1.50 race in history. But she said she has no regrets.

“The goal was to skate under 1 minute and 50 seconds and I managed. I’m very happy to pull that off under these circumstances (not the ideal low air pressure due to weather conditions).”

Takagi was paired up with teammate Ayano Sato (JPN), who had won her career first World Cup medal in a classical distance with bronze in the 1500m two weeks ago in Stavanger.

“I’m happy that we have depth in the Japanese team, so I can skate against a teammate at a similar level,” Takagi said.

Sato showed that her medal in Norway was no coincidence. Albeit at a respectable distance behind Takagi, she ran away with silver in Salt Lake City, clocking 1:51.46.

“I’ve been skating the 1500m and the 3000m for a long time,” Sato said. “But somehow I finally figured out the rhythm of the race. And that's the difference with how I performed in the past and today.

“I was a little nervous to skate against Miho (Takagi). I knew that she was racing for the world record, so I tried to forget who I was racing against and skate my own race. Maybe that's what this result came from.”

With renewed confidence, Sato is looking forward to the rest of the season and especially the Olympic Winter Games in Beijing 2022.

“Of course we will try to go for a second gold medal in the Team Pursuit,” Sato said. “I want to perform in the Mass Start too, but also in the individual events.”

Thanks to her silver medal, Sato climbed to second place in the World Cup ranking, behind Takagi, who has clinched all three 1500m races so far.

De Jong takes bronze in clash between speed and stamina

After Takagi had set an incredibly high bar yet again, home skater Brittany Bowe (USA) took on Antoinette de Jong (NED) in the final pairing. It was a classical clash of speed versus stamina, which led to a difficult change-up at the first backstretch.

“I've not had the best exchanges this whole season,” Bowe said. “But that's the cool thing about the 1500m. Girls coming from the 3000m side and girls coming in from the 1000m side.”

Due to Bowe’s faster opener in the outer lane, she almost came level to De Jong at the first backstretch. De Jong had to make pace to avoid a collision and Bowe, who had priority coming from the outer lane, held back a little.

“I just tried to get into the draft as best as possible and I think she had a faster first (full) lap than me, so it was OK,” Bowe said.

The American lacked the stamina to hold on to her pace, however and finished eighth in 1:52.32, while De Jong went on to win bronze in a personal best of 1:51.72, edging out compatriot Ireen Wüst (NED) by 0.38s for the podium.

“My 1500m was much better than in Poland and in Stavanger — more in control, technically better,” De Jong said. The 3000m World Champion will skip next week’s World Cup in Calgary to prepare for the Dutch trials, which are held on 26-30 December in Heerenveen.

Ivanie Blondin ran away with gold after a blistering final lap, but Sofie Karoline Haugen was the hero of Sunday’s Mass Start, converting a bold breakaway into a bronze medal. Haugen was in a breakaway with Marina Zueva (BLR), who had attacked early on in the race, and Nadja Wenger (SUI). Her Belarussian and the Swiss fellow-escapees did not manage to hold on to the end however, whereas Haugen hung in by the skin of her teeth.

Winning bronze came as a big and welcome surprise to the 26-year-old Norwegian.

“I don't know what to say. I wasn't expecting to qualify for the final, so then this is just unbelievable.”

When she made it to the final, she took on a do-or-die strategy.

“I had a feeling that I had to try to do something,” Haugen said. “If I would get lapped, it wouldn’t matter, I just wanted to try something.

“I was expecting them to take me, but then I just heard my coach was yelling that I just had to go. So, I was just giving everything I had all the way, but I also felt really good. I had more control in the corners than before, that's a good feeling.”

For Blondin, the race folded out perfectly. Irene Schouten (NED) was chasing the escapees, to set up teammate Marijke Groenewoud for the final sprint and Blondin could sit back.

“I think I just positioned myself really well. I was just patient with the final sprint.

“Sophie Haugen was way ahead. She was on a breakaway and she held it the longest out of everyone. Quite honestly in the last lap, I wasn't sure if we were going to close that gap, but we did.

“She was hanging in there and she just skated beautifully. It was a really good tactical race for her, and it's always nice to see different girls on the podium.”

Mass Start world champion Groenewould tried to get past Blondin on the final straight, but had to bow her head and settle for silver.

“It was just a great final sprint. I think that's the fastest lap I've ever done at the end of a Mass Start,” Blondin said.